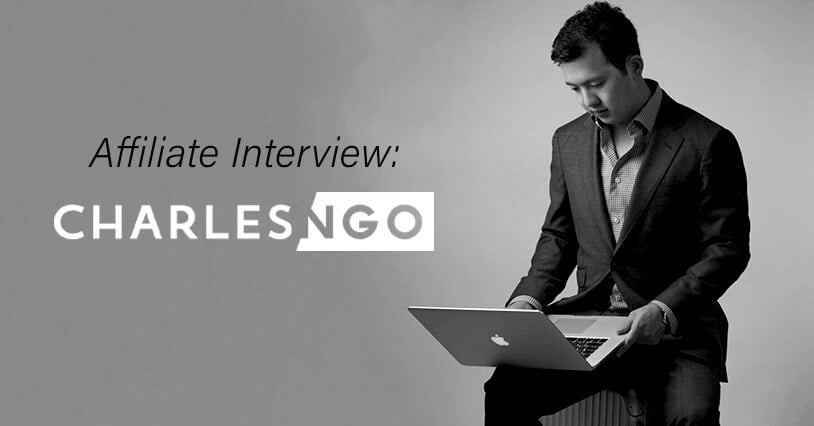 In today’s blog, we have a very interesting and well-known character in the affiliate marketing space.

You might have seen him around at conferences or online. He’s often (self?) described as an Asian James Bond.

Anyway, I think we can all agree he’s one slick fellow, and he certainly knows his stuff when it comes to affiliate marketing.

I’ve been following Charles Ngo for a few years now, and I’m always astounded by all the high-value stuff he gives away to his readers on his blog. Seriously, if you haven’t already, go and grab his free ultimate guide to affiliate marketing from his website. It will open your eyes.

As for why I wanted him on the blog, it’s because I talk a lot about blogging and content and site-building, while he focuses more on paid acquisition and cost-per-action style campaigns. Different strokes for different folks. I really think you’ll get a lot out of this interview because of that.

Let’s get into the interview, because it was a good one!

1. Hey Charles, thanks so much for coming on for an interview. I’m a big fan and have been following you for quite a few years.

For the folks who maybe don’t know much about CPA, can you explain the difference and what makes you favor the CPA versus the CPS model?

Sure, thanks for having me.

Cost Per Sale: You promote a product. The customer has to BUY the product, then the affiliate gets a commission.

Cost per Action: You promote an offer. The customer has to take an ACTION, then the affiliate gets a commission.

Cost per sale is generally harder to convert because you have to convince the person to pull out their credit card and buy something.

Cost per action is easier to convert. The “action” could be filling out a form with their name, email, and phone number, and then you get paid. The advertiser makes money because they follow up with the person’s information and try to sell them down the line.

Think about how much easier it is for someone to take an action compared to someone pulling out their credit card and buying something.

The cool thing is there’s not as much of a difference if you’re an affiliate marketer. Some offers feature both ways to monetize.

I suggest people start off with CPA style because it’s easier to convert and get more data.

2. For a newbie affiliate — someone coming into affiliate marketing raw after just learning what it is — what would be the number #1 thing you think they should focus on first if they wanted to be a CPA affiliate?

The most important thing is to decide on one path to follow. I’ll see people waste months going back and forth.

Pick a path and dedicate yourself to it for a minimum of three months.

For example, let’s say you decide you want to become a mobile affiliate. Now spend the next three months studying as much mobile as possible and learning as many mobile campaigns as possible.

You can’t study everything in affiliate marketing, but you can master one subsection of it.

3. One of the things I always tell people wanting to achieve success in affiliate marketing and business, in general, is to take big action.

I know you’re a big proponent of this too. How important is it to have a game plan, and how do you go about getting organized to that level?

People either plan too much and take no action, or they don’t plan and take too much action.

The hardest thing for people is finding that balance between planning and taking action.

I always have a game plan for everything I do. The key is that once I set that game plan, I go into execution mode. Don’t make the mistake of setting a plan and then changing the plan over and over again.

As far as getting organized, I like to use a system called AgileResults. It’s a simple system that uses the rule of three.

Every year I have three outcomes I want to achieve. That trickles down into three outcomes for the month, for the week, and for the day. It’s a waterfall system.

By limiting my goals to three, it keeps me organized and focused.

4. If you had to start again tomorrow, what would be the first thing you’d do to rebuild your affiliate marketing empire?

The first thing I’d do is to increase my cash flow. This could mean getting a job. I’ve seen too many people want to know how they can make money online with a budget of $200. It’s hard. You can barely pay for the tools with that budget.

The more money you can invest into your business, the higher your chances of success.

Second, I’d do my best to find a mentor.

Remember this: no one owes you anything. What value can you bring to someone for them to help you?

Next, I’d reverse engineer what’s working. I’d invest in a spy tool and look at the top campaigns running. What do they have in common? What type of offers are they running? What type of landing pages?

5. You have traveled a lot and you’ve visited and lived in some interesting places all around the world, from America to Asia. Now you’ve settled in New York and have been there for a while. What made you choose New York?

Where you choose to live has a huge effect on your happiness and quality of life!

Fortunately, I have a career that lets me live anywhere I want, and I’ve taken advantage of it. I keep moving around every year because I’ve always been curious.

As for NYC, I moved here for a few reasons. The main one is that I’m 33 and not married. I felt the window was closing for me being able to live in NYC before I settle down.

I’ve always wanted to live in NYC since I was a kid. It’s expensive living here, but I can always make more money.

I can’t put a price on the experiences and growth I’ve been able to have from living here.

We’re planning on launching our first online courses later on this year.

I’ve been teaching people through in-person workshops for the past few years. We made the decision to switch over to online courses, mainly because the workshop model is exhausting.

Outside of that, just focusing on learning and growing!

7. Where can people find you and follow what you’re doing?

I’m not active on social media anymore. The best place to find me is on my blog, www.CharlesNgo.com.